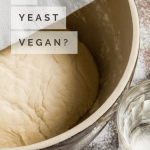 Is yeast vegan? Great question! As you might have already deduced from our title, yeast is, indeed, a microscopic fungus. And, since fungi are living organisms–and vegans don’t eat the living–don’t we have our answer (and isn’t this a very short article…)?

Alas, while tiny in physicality, yeast is a complex matter, often shrouded in hearsay. Akin to a classic film you definitely know but just haven’t gotten around to seeing, maybe you’ve heard of yeast but can only relay the basic “plot points,” drawing from the “reviews” you’ve gotten from your yeast-familiar friends.

In fact, were yeast to star in its own movie, we’re pretty sure this enigmatic biological character would fit right into the mystery genre, anyway… so, before we jump to a (vegan or non-vegan) conclusion, let’s do some serious sleuthing on the subject.

What makes yeast a “living” organism?

According to an article by Delish (1):

Yeasts are single-celled microorganisms that predate humans by hundreds of millions of years. There are more than 1,500 species of yeast, but the species we’re concerned with today is saccharomyces cerevisiae, derived from Latinized Greek meaning “sugar-fungus.” This group of yeasts includes strains of baker’s yeast and brewer’s yeast, responsible for producing our favorite carb-heavy treats: bread and alcohol. They work by feeding on sugars and converting that food into carbon dioxide (and alcohol, given enough time), giving your baked goods that soft, airy structure you love and your beer that bubbly nature.

The yeast cell is shaped like an egg, but without a microscope, you’d never know: Its size ranges between 6 and 8 thousandths of a millimeter; no larger than a pinhead (one cubic centimeter of yeast contains more than 10 billion cells)!

Yeast is also an eukaryote, an organism with a complex cell or cells, in which the genetic material is organized into a membrane-bound nucleus or nuclei. The yeast cell nucleus, for example, contains 16 linear chromosomes. (2)

Further, this nucleus is surrounded by a cell wall, which consists of an outer layer of mannoprotein, an inner layer of glucanes, and a cytoplasmic membrane with high protein complex content…we weren’t lying when we said that yeast may be small, but it’s mighty complex! (3)

READ NEXT: ARE PRETZELS VEGAN?

So, should we be eating it? Is yeast vegan?

While yeast is a living organism–and its internal infrastructure far more developed than that of say bacteria (a prokaryote)–the important factor to consider here is whether or not consuming yeast brings harm to the organism.

Always keep in mind the very basic, core principle of veganism is to spare all living creatures from pain and suffering. While yeast is fairly dense for such a small organism, what it doesn’t possess is a central nervous system or a spinal cord. (4)

This means that yeast isn’t sentient, with no capacity to feel pain or suffer. And thus, it is perfectly fine to consume yeast and maintain your devoted vegan status!

Think of it this way: When it comes to sentience, consuming yeast is really no different than breaking a stalk of broccoli, biting into an apple, or cracking a walnut.

But, of course, no one’s here to force-feed! We here at Happy, Happy Vegan simply aim to inform, using honest-to-goodness facts, and then leave all of the decision-making on the facets of your nutritional practice up to you.

In fact, so you’re sure that we see-and-hear you, here’s a video on how to make yummy sweet potato flatbread, totally yeast-free (…or keep reading for more on baker’s yeast, soon):

For more info on what types of bread you can eat on a plant-based diet, check out Can Vegans Eat Bread?

Now that we’ve solved the mystery (yeast consumption is not murder, but in fact, an innocent practice), we’ll uncover the various types of yeast, both “active” and “inactive,” and how to safely consume them, as well as the nutritional benefits to expect and enjoy.

Widely-wielded, from baker to brewer, yeast works hard to help produce some of the food products you may already savor on a daily basis!

One of the main functions of yeast in food production is fermentation. When the particular strain used during this process, Saccharomyces cerevisiae (S. cerevisiae), runs out of oxygen, it converts carbohydrates (i.e. the sugar provided by flour) to carbon dioxide and alcohol. (5)

While this alcohol evaporates during baking, it’s this production of carbon dioxide that causes the bread dough to rise, or leaven. (BTW, you can click the link if you’re wondering whether or not alcohol is vegan!).

Note: Though baker’s yeast is vegan, always check the other ingredients listed on any loaf of bread, as there’s chance the baker might’ve used eggs or milk during production. Or, make your own, using one of these bread recipes for vegans!

Here’s a fun, friendly (but highly detailed) video by HowStuffWorks that describes the phenomenon bread rising:

Fun Fact: A form of baker’s yeast, known as active dry yeast, was developed during World War II, which did not require refrigeration and baked breads twice as quickly!

Today, for your home baking excursions, it’s easy to find this active dry yeast (or instant yeast) in any grocery or online with products such as Bioreal Organic Active Dry Yeast and Bob’s Red Mill Active Dry Yeast readily available.

What is “active” yeast?

Baker’s yeast is known as an active form of yeast, which means you do not want to consume this on it’s own! If you do, it will continue to grow in your gastrointestinal system (we imagine it’s as painful as it sounds…).

While baker’s yeast is not safe for consumption by itself, read on to learn about the following forms of inactive yeast that will not only be totally harmless, but in fact, quite helpful to your body!

You could’ve probably guessed that S. cerevisiae is the same species you’ll find in baker’s yeast. However, several different genera may be used, and each lends its own flavor and texture characteristics to the eventual batch of beer.

Watch a guy with an actual Ph.D in yeast genetics discuss its pivotal role in beer production:

As previously discussed, brewer’s yeast has been deactivated and pasteurized, so it can also be consumed safely on its own. It is a rich source of B vitamins and chromium, but this is true only when coming from the beer making process.

Additionally, brewer’s yeast can be grown on barley or malt (which mimics the brewery process), producing a different nutrient profile…

So, this is another instance where (though we now know that brewer’s yeast is vegan) it’s always good to check product labels to ensure the other elements involved are both animal-friendly, meet any potential additional health parameters (e.g. gluten-free), and serve your holistic nutritional needs.

Perhaps the most popular and widely utilized form, nutritional yeast is another form of S. cerevisiae that has been dried, pasteurized and deactivated. It is rich in niacin, folic acid, zinc, selenium, thiamine, and beta glucans (which can be extracted from the cell walls), known for their immuno-stimulating role.

Nutritional yeast is special because it is a complete protein that provides all nine essential amino acids. For more info, check out our article on the best BCAA powder for vegans.

It’s also often fortified with vitamin B12 (B12 supplements are strongly recommended for vegans, by the way). More? Nutritional yeast demonstrates antiviral and antibacterial properties, which makes it a popular tool among herbalists for treating infection, acne, low appetite, and diarrhea.

How can you best take advantage of this wonder food? We’re all in luck (especially those of us who randomly pine for cheese) as nutritional yeast has a rich, nutty flavor, and it can easily substitute for cheese in most recipes, or be used as topping for toast, vegetables, soups and popcorn.

Here’s a short, sweet and super-informative video on how to get the most out of nutritional yeast:

This is simply a form of concentrated nutritional yeast (so, still vegan!) most commonly found in the form of a paste (popular brands include Marmite and Vegemite), with a pungent, umami flavor.

And, oddly enough, perhaps due to this specificity, yeast extracts have created a bit of a cult following within certain countries, such as Australia. Watch Hugh Jackman defend Vegemite’s honor on the Tonight Show with Jimmy Fallon (and teach us all how to eat it properly):

Or, if you’re American, and despite the plug from Wolverine, you still need a little convincing, here’s this:

At this point, as we come to the end of our “is yeast vegan?” journey, we hope you feel relieved about the past, knowing that the bread you’ve been eating and beer you’ve been drinking has caused “no harm, no foul” (for the yeasts, at least!).

We also hope you feel optimistic for the future (and rest easy), knowing that yeast consumption is a completely compassionate option as you continue to choose your own nutritional adventure!

Got something to say on vegans eating yeast? Leave me a comment below!

About The Author:
Carly Keyes

Carly Keyes is writer and personal trainer who decided to go plant-based after a visit to the True North Health Center in Santa Rosa, CA. The change has completely revolutionized the way she feels, looks, thinks and behaves, making her a very vocal advocate of the vegan lifestyle.

She’s also a keen singer/songwriter and has studied screenwriting at the University of Michigan. Carly lives in Bloomfield Hills, MI.

5 Warning Indications You Have Muddle Blindness (I…

How To De-stress After A Long Day

To go through the post, please take a look at https://simplyfordogs.com/doggy-foodstuff/can-pet dogs-consume-tofu/ If you have a desire to feed your

5 Diets to Heal Your Hormones – with Dr. Anna Cabeca | The Empowering Neurologist EP. 150

The Best Salt According to Science (NOT what you think!)